PASSING OF A FRIEND, JOHN TUCKEY

Just heard from a friend of mine that John Tuckey recently passed away, aged 88. I think its appropriate for me to remember him here. I started wargaming with John in the late 1980s, and continued to do so during the following twenty years. Among a certain generation, particularly those organising shows, he was a well known character. As a wing-commander, retired, he was every bit a no-nonsense, forthright sort of bloke, and he wasn't acting the part. I liked him, and others have said that when he mentioned my name, it was positive. I will take that as a strong compliment. I suspect many visitors to shows all over England from 1980 to 2010 will have seen his historical refights, always involving thousands of 28mm figures, and in all periods of history. Recently spotted a photo in a Featherstone book with a Tuckey game featured. He later staged his own wargames show at Marston-Magna, Somerset, and I was pleased to put on a game at most if not all his shows. In his last few years he sold his collections and re-embraced model railways, but on occasions we did still speak. He was a powerful character, a British patriot, and I'm sad to know he is no longer with us. RIP John. Michael G. Butterfield 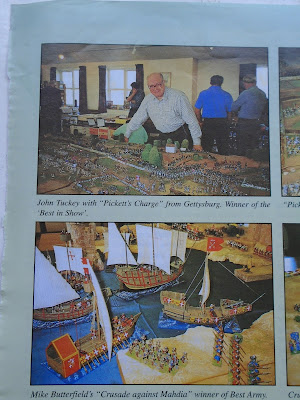