Have just received a batch of Acemi Oglan arquebusier from Hinchliffe Miniatures. The figure is dated for the late 16th century but I would suggest its fine for the 17th century, and we can turn a blind eye for battles in the 18th (as we all do with 28mm collections). Ian Hind decided to make new moulds for this casting so its totally free of flash. In my opinion, they are equal to TAG, and I have some spare Janissary officers from that company which will mix perfectly. The Hinchliffe catalogue code is RE69, but the website photo presently needs changing. Here is my photo to show what they actually look like. 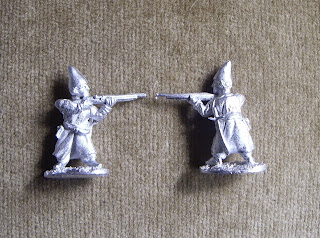 The Acemi Oglan were, I believe, young slaves, most of whom ended up serving in the various Janissary ortas. Others may have found themselves in the state administration. These castings will be a joy to paint up. MGB
Posted by MGB at 15:25 3 comments: