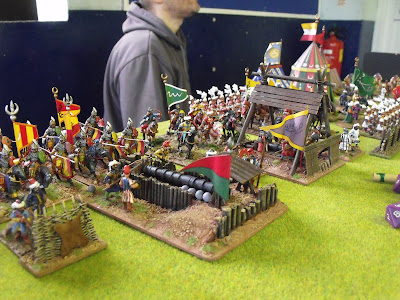 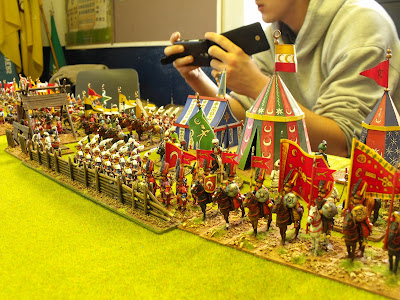 Inspired by the epic historical event, the Honiton club were allowed to garrison Constantinople with as many 15th century medieval and warhammer figures they could muster (300plus), while a team from SKG3 took command of my near 600 Ottomans and their allies. Unfortunately for the Ottomans, most of our bombards facing the main wall cracked within a few shots, with no breaks on the city wall. Most of the best Ottoman troops were mounted, while the bulk of the foot were Azabs or colourful extras, on neither count of value attacking the defended walls. If that wasn't enough, we may have had six exotic tents, but hardly any siege equipment to cover our approach to the walls. Their garrison included some 50 English mercenary longbowmen, half of whom broke the final assault of some 90 janissaries attacking in column. Although the bombards facing the eastern walls made two breaches and brought down a tower, the two gallies and two rowing boats were insufficient to enable a major crossing to take advantage of the openings. Losses were no more than about 35 on the defenders, while we suffered about 100. Commencing at 8am, we concluded at 4pm, the Sultan unwilling to throw more lives against the city walls. We all enjoyed the game and I believe lessons were learnt on medieval tactics and the need for siegecraft. The rules were fast, fun, and realistic. Had the siege persisted and we had time to construct field works the result might have been different as most of the army was still intact, but ladders and dismounted siphari would have been vital. Sorry, most of the photos did not work out as well as hoped, but I'm confident the problems can be solved for future games.
Posted by MGB at 11:32 3 comments: