History of Islam, Part 1 of 5: Reign of Abu Bakr

The Early Arab Conquests and Caliphate

Here is a link to an informative yet easy to follow account of the rise of the Arab (Umayyad) Empire, and how a division occurred between the Sunni and Shia forms of Islam. It comprises five short videos, see link above. CaspianReport https://youtu.be/no5RCHRbknk
Posted by MGB at 12:59 No comments:

I have always preferred wargaming the later period of the Spanish Reconquista, the 14-15th centuries, as opposed to the more usual 10-13th centuries (El Cid, if you like). The main reason is the vast range of weaponry in the 1400s utilised by both sides for their constant campaigns. Many involved raids by the Moors, for Christian slaves and plunder. Others were small scale actions by the Christians to capture fortified villages by surprise or siege. In the later period we find traditional medieval and early gunpowder weapons in common use. With a fair number of bombards, it was time for my collection to have a really archaic weapon, for the fun of it! MGB 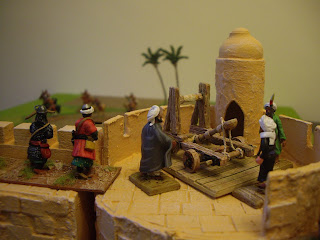