Recently fought a game at the Honiton Wargames Club. With less than three hours playing time, I wanted a scenario which had a chance of being completed. During the period 1485 to 1517 the Ottoman and Mamluk empires were at each others throats for control of much of the middle-east. Our scenario comprised a fortified town, with a ruler having informed both sides of his fidelity but also his inability to take an active part in the war. Accordingly, both empires dispatched a cavalry force, with baggage train, to secure their position. At this point I should admit my Mamluks were drawn from my Granadine, Almorhad, and Asiatic Turks. The distinction to this game was both sides fielding about 65 cavalry, of various quality and armour. Two units on each side were granted the right to use their composite bows. 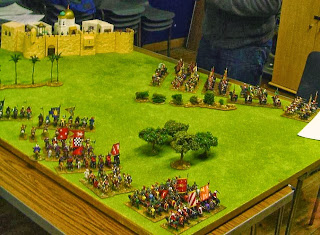 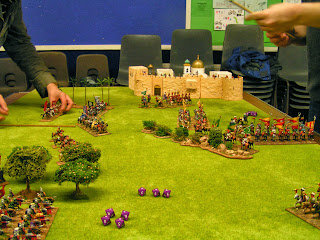 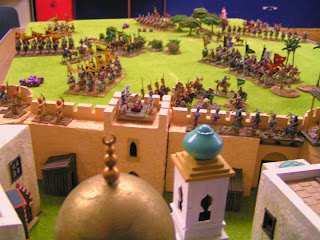 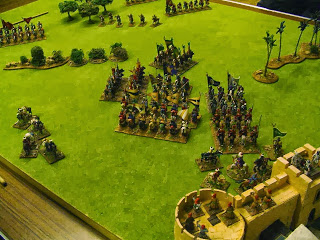 Victory conditions comprised the slaying of a commander, the destruction of the enemies baggage train, and/or the board area under your control at the conclusion of the game at 10pm. The rules worked brilliantly and, I believe, were quite accurate in their results. The Mamluks had initial successes, the Asiatic sipahi being no match for the Mamluks. But a turnabout took place when some 16 Mamluks and 6 Arab light horse attempted to charge near double their number, including the elite Suvarileri and Silahtars, and were beaten in the melee. Only 9 survived and understandably routed off the field. Although the Household Mamluks continued a steady advance against all that sought to oppose them, they even brought down by bow three enemy pack animals. Their slow advance allowed the Ottomans to secure the game by land grabbing just before the agreed end of time. This was a successful cavalry action enjoyed by all participants. As a footnote, the local Emir welcomed in the Ottomans, but unfortunately died the night following when he accidentally became entangled in his ornamental curtain tassels. MGB
Posted by MGB at 14:09 2 comments:

Just visited Willie Anderson's blog, see links. Willie is raising a collection of Ottoman Turks by careful integration of various 28mm manufacturers, and they look great together. I think I found the photos of more interest because of his figure choices. He has just posted up some photos of his planned siege of Constantinople game and I strongly recommend you visit his blog. MGB
Posted by MGB at 18:55 No comments:

I recently staged a living history display at Torquay Museum, my group portraying late 18th century Royal Navy and British Marines. We were there to help promote the opening of their exhibition on piracy, fact and fiction. Of particularly interest for me was several items relating to the Corsairs, or Barbary coast pirates. Here's a photo Josh kindly took of their life sized Corsair Warrior. MGB 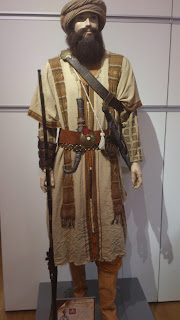 Those interested in wargaming the early Ottoman campaigns in the Balkans might like to view several videos uploaded on Youtube. Those styled 'Wallachian Prince Michael the Brave and His Victories over the Ottoman Turks' will certainly inspire you to paint up those lead figures. As costumes go, I've seen far worse used in Turkish and Indian historical productions. MGB
Posted by MGB at 13:52 No comments:

The Matteo Perez di Allecio engravings of 1582 of the earlier Siege of Malta are often overlooked by wargamers, yet they include some interesting suggestions for Ottoman flags. Hope my renditions below are of interest. Note, the originals have somewhat rounded tails but I believe the style given here is more authentic. I have attempted to utilize the apparent shadings to make my conjectural choice in colours. 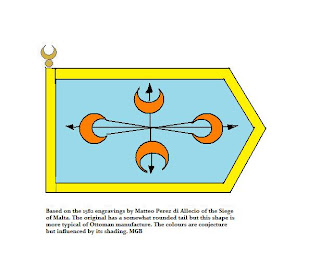 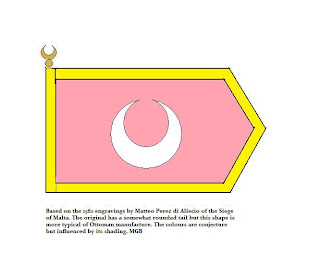 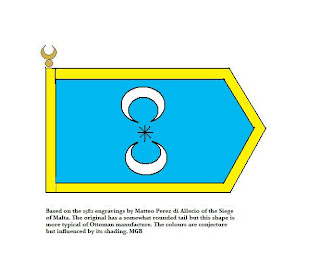 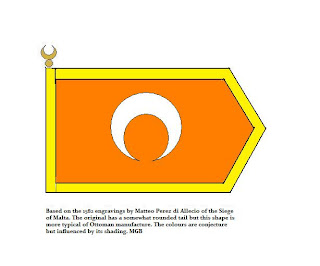 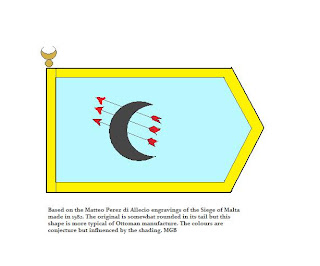 Came across 'Lonely Gamers' blog by chance. Discovered two historical wargames involving Napoleonic Russians and Ottoman Turks. Try not to become too dissolutioned with your own efforts when you see the scale and quality of the painted collections. The Ottomans are mainly Old Glory 28mm, and the effect is superb...... can say no more. See Links.
Posted by MGB at 19:00 No comments:

Found another blog which includes several reports with photos of 28mm wargames involving Ottoman Turks. Worth a visit, see links.
Posted by MGB at 18:22 1 comment: