I regularly search out sites with Ottoman 25-28mm collections. Just visited John's blog with his mixture of Hinchliffe and Essex miniatures. With a fair number of photos just uploaded, do have a visit. Update for January 31, 2015. They have just uploaded photos of a wargame refight of the battle of Harran in 1104, between Seljuks and Crusaders, very large numbers involved! See Links
Posted by MGB at 10:03 No comments:

Preoccupied with campaigns elsewhere in the Mediterranean, the Ottomans limited their support for Moorish Spain to coastal raids. Even so, the fear of a large scale intervention must have been a constant concern to all the Christian states on the Iberian Peninsular. It was the Ottoman Sultan Bayezid II that sent Admiral Kemal Reis with a fleet to cooperate with the Emir of Granada, Abu Abdullah. During 1490-5 this naval force assaulted Malaga, and even captured Almeria, in addition to raiding the Balearic Islands. Despite the fall of Granada in 1492, the Ottomans continued to terrorize the coastal population with further raids in 1501, during 1513-14, and in 1529. Here are some Ottoman galleys. Constructed of plastic card with wood masts, they are surprisingly robust models. Bold paintwork and exotic cloth coverings were typical for all the states using such vessels. With detachable bombards these galleys can cover quite a few centuries of armed conflict, providing interesting wargame scenarios. Not sure if any Janissaries actually participated on these raids but I've included a yellow-coated orta armed with composite bows (TAG Miniatures). MGB 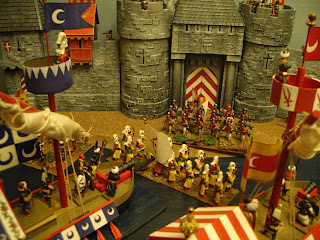 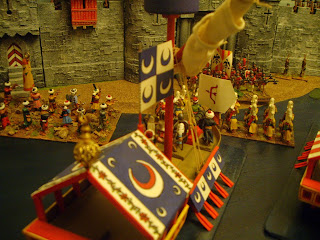 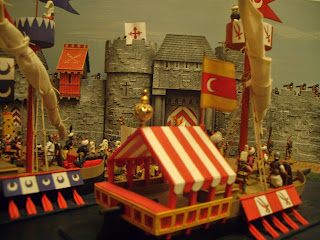 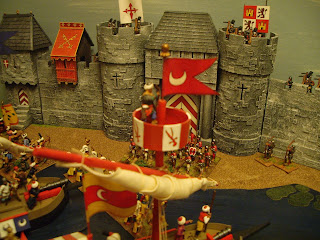 Andalusian Guards for the Reconquista Wars

Have finally completed a unit of foot guards to protect my Moorish rulers and commanders. I wanted these to be in heavier armour and decided on Musketeer Miniatures. I must say they arrived with little flash and full of detail. My thanks to Luke Radford for helping me to clear much of the initial paintwork. Also included in the photos are some Gripping Beast and a few of my own converts. MGB 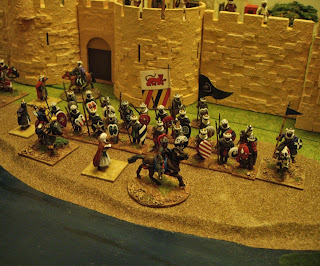 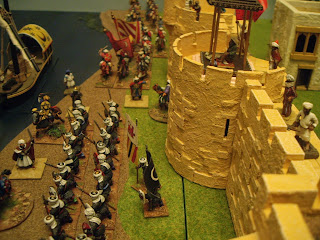 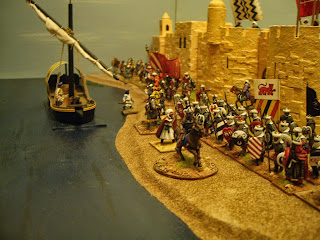